Dermatitis is an inflammatory process characterized by pronounced skin diseases. Interaction with the skin of chemical, biological and physical substances leads to an indispensable allergic reaction. It is not an infectious disease, which means it is not dangerous to others. 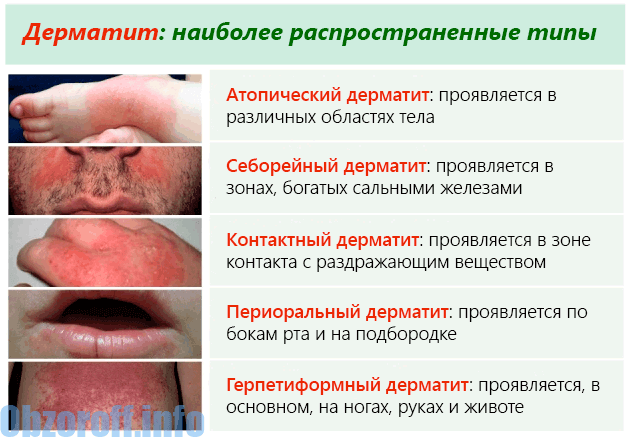 Skin lesions, dermatitis, due to allergies or inflammation appear due to genetic, acquired or provoked reasons:

Treatment of dermatitis is possible with the correct diagnosis from a qualified doctor who will select the appropriate antihistamines in accordance with the type of the disease, preventing allergies and reducing its symptoms, and conducting a course of psychological adjustment. Long-term treatment of dermatitis takes at least 28 days.

1. Dühring's dermatitis is characterized by causeless attacks and exacerbations. Symptoms of this unique skin disease are manifested in vesicles, rashes, blisters, which form uncharacteristic for dermatitis forms in the form of rings, long threads. The effect on the skin is manifested in redness, suppuration of the vesicles, the formation of a crust and wounds, and healing. More often the elbow joints, knees, buttocks suffer.

2. Erythroderma is an extensive lesion of the skin. It is difficult to treat. The causes of the disease are allergies and a consequence of existing diseases in humans: fungus, leukemia and others. Symptoms: hair loss, fever, nail damage, heart failure. Treatment of this type of disease is carried out exclusively in special-purpose clinics under the supervision of medical personnel and a highly qualified doctor. The patient needs a specialized ward with a choice of temperature and humidity. Preparations: "Sorbilact", psoriasis cream series "Zdorov", albumin solution, "Reamberin". To strengthen the body, drugs are prescribed to increase immunity and vitamins B, C, E, A. Local application of salicylic ointment.

3. Ritter's leaf-like dermatitis. More often observed in newborns against the background of flowing staphylococcus. It is observed in the genitals, anus, navel. Manifestations in the form of fever and nausea are possible. At the onset of the disease, swelling, redness and blisters form on areas of the skin. The next stage is the appearance of erosion. After that, the dermatitis goes away, the wounds heal. For treatment, externally used erythromycin, colimycin ointments Psorilax, Dermazolone or Lokacorten. In addition to treatment are vitamins of the "C" and "B" groups.

Patients with Ritter dermatitis are observed at the doctor of the infectious disease specialist and dermatologist.

To avoid dermatitis, follow these instructions: use warm water for bathing, use hypoallergenic cosmetics. Include foods rich in vitamin E and A in your diet. To moisturize dry skin, use D-Panthenol and Losterin creams. Wear linen and cotton clothing; avoid stressful situations. Visit specialized medical sanatoriums annually.

And most importantly, never buy drugs on your own if you are not sure of your diagnosis or its side effects. A visit to a doctor will save you from rash purchases and subsequent poisoning of the body.