Food intolerance is the body's response to certain foods and nutrients. Such processes can occur when the digestive system is not able to fully or partially absorb some nutrients. As a result, they accumulate in the intestines. When the maximum levels of intoxication are reached, the body reacts with the appearance of symptoms. Symptom-provoking levels are individual. That is why many patients with food intolerances do not feel any visible discomfort.

The disorder should not be confused with food allergy, the mechanism of which is associated with activation of the immune system. People suffering from allergic reactions to certain components should permanently and completely exclude them from their diet. In case of intolerance, it is enough for the patient to temporarily remove some foods from his daily diet.

The causes of food intolerance are divided depending on the type of food that provokes the reaction: 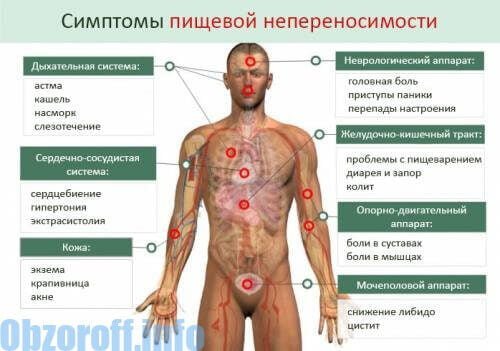 Symptoms of food intolerance are similar to those that appear in the presence of allergies and are diverse:

The most common types of food intolerances

The two most common elements that provoke food intolerance are:

Lactose intolerance occurs due to a deficiency in the enzyme lactase, which is involved in digestive function. The absence of a substance leads to the occurrence of fermentation processes in the intestine and gas formation. Sorbitol, found in many fruits, can also cause the disorder. Together, these two elements often cause irritable bowel syndrome.

The reaction to gluten contained in wheat, rye, barley, oats is called celiac disease. The body of people suffering from this disorder is not able to absorb gluten. This directly affects bowel dysfunction. Its walls damaged by gluten reduce or lose the ability to absorb the necessary human activities, nutrients and trace elements. Symptoms of gluten intolerance are:

In children, a lack of appetite is often observed. Also, intolerance to food additives and dyes may occur in some people.

To determine the disorder, the patient should receive a detailed consultation of the attending physician, excluding the presence of other diseases with similar symptoms. Particular attention is paid to the type of manifestation of the disease and its frequency with respect to the use of certain products. Suspicion of intolerance will increase if, with frequent use of elements, the symptoms become more frequent.

In this case, the diet then eliminating food will help in establishing the diagnosis. Over the course of 3 – 4 weeks, “hazardous foods” are removed from the human diet, and then gradually introduced under the supervision of the attending physician. Emerging symptoms can clarify the picture of the disorder and identify an irritating bowel element.

Food intolerance can occur in humans throughout life. There is also the term “threshold dose” which causes the onset of symptoms. It is her definition that will help the patient avoid the unpleasant consequences of the manifestation of the disorder. Partial or complete removal of harmful food from the diet will eliminate the symptoms and improve the digestive process. To improve the digestion process, as a preventive measure, the use of tea Gastro.

For people with celiac disease, there are a number of specially formulated products to help you achieve a gluten-free diet without pain. Lactose intolerant patients may occasionally drink a glass of whole milk. It will not harm their health. And the same is the case with the patient's consumption of aged cheeses, yogurt, kefir, which have a very low lactose content.

In itself, the disorder is not considered dangerous to health if you understand its nature in time and apply the principles of nutrition that make people healthy.