All people felt pain. If the pain is not severe or if it "hurts" and has passed, then they do not go to the doctors, they do not drink medicine. But the long-term sensation of pain is called chronic pain syndrome. And then the patient suffers constantly, cannot sleep. With prolonged pain, the body triggers a defense mechanism and as a result, edema, vasospasm, pinched nerves occur. Microcirculation of blood is locally disturbed, and in cells and metabolism.

Then you should see a doctor, make a diagnosis, choose a pain medication and how to take it. This may be one of the forms of Diclofenac or the complex preparation Neurodiclovit.

It is used orally for inflammation and degeneration of joints and extra-articular tissues, post-traumatic and postoperative pain, renal and hepatic colic, gout, migraine, and neuralgia. And also use Diclofenac for pain during infections of the respiratory system, pneumonia, menstruation. 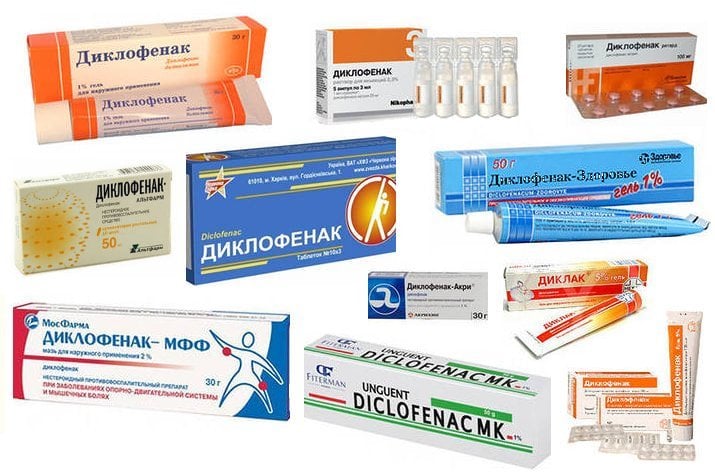 Locally used for bruises, sprains, dislocations, rheumatism of soft tissues. In ophthalmology for diagnostic and therapeutic procedures, before and after extraction of small objects from under the eyelid, inflammation of the mucous membrane of the eye. And also for the prevention of pathological narrowing of the pupil and swelling of the optic nerve.

Diclofenac release forms: ampoules with a solution for intramuscular injection, tablets, dropper bottles with eye drops, aluminum tubes with ointment or gel, plasters, sprays, rectal suppositories (suppositories). Included, as the main active substance, in the composition of another 65 drugs with other trade names.

The composition includes diclofenac sodium and vitamins B1, B6 and B12, which are involved in metabolism, nerve signaling, red blood cell maturation, synthesis of amino acids, protein, carbohydrates and lipids, cell regeneration. Beneficial effect on the nervous system. 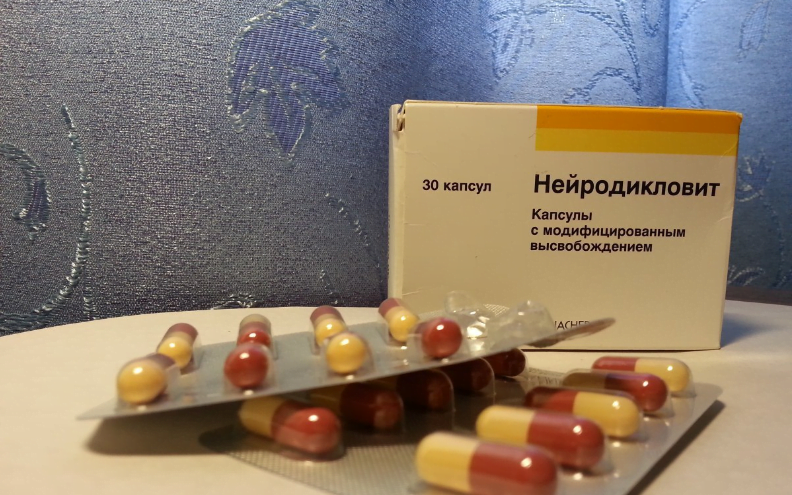 It is used for pain during inflammation and injuries of joints, respiratory organs, menstruation. Release form - capsules, dissolving in the stomach.

Both drugs are used as an analgesic and anti-inflammatory agent. Indicated in combination with massage and physiotherapeutic procedures. Contraindicated in pregnant women and during lactation, children under 2 years.

Neurodiclovitis is a drug containing diclofenac combined with B vitamins. This has its own advantages, that is, taking vitamins improves the healing effect. However, they can have undesirable side effects in the form of poisoning in case of overdose and allergies in case of hypersensitivity.

Neurodiclovit is available only in capsules. Diclofenac has many forms of release, so there is the possibility of individual selection and wider application. In Europe appeared gel Imosteon, intended to eliminate pain in the joints and spine. Today, Imosteon surpasses the effectiveness of such popular creams as Artrovex и Arthrolon, Diclofenac, because it contains a component such as chondroitin sulfate.

For whom is diclofenac better?

For whom is Neurodiclovit better?

The capsule is swallowed, not chewed, washed down with a large amount of liquid. The first day, 1 capsule 3 times a day, then 1-2 times a day. Duration of the course according to indications and therapeutic effect.

Neurodiclovitis is contraindicated in children, pregnant and during lactation, with hypersensitivity to diclofenac and B vitamins, ulcers and wounds in the gastrointestinal tract, problems with the lungs, heart, kidneys, liver and many other diseases. Not recommended for smokers and alcohol drinkers. Actively affects many processes in the body and the effect of other drugs.

There are serious side effects in Neurodiclovit. In case of an overdose, vomiting, bleeding and acute pain in the gastrointestinal tract, diarrhea, cramps, tinnitus, dizziness, lethargy are possible; in rare cases, it can increase blood pressure, lead to damage to the kidneys and liver, respiratory depression and coma. Therefore, it is sold in pharmacies according to the prescription of the attending physician.

If you feel worse, immediately stop taking the drug Neurodiclovit. In case of severe deterioration, call an ambulance. Forced methods of cleansing the body (taking laxatives and diuretics, cleaning and replacing blood) are ineffective, since Diclofenac and B vitamins are already associated with proteins. Symptomatic treatment and general strengthening procedures are shown.