Auto buffers Power Guard these are shock-absorbing pillows, characterized as inter-turn ones, the place of installation of which are springs, which guarantees safety and introducing additional convenience into the driving process. This is an original German development for tuning your car!

Power Guard to a certain extent still a newcomer to the market, so information is scarce regarding autobuffers. If you devote time to the relevant forums, you can see a large volume of positive reviews regarding the product in question. At the same time, forum users, including official manufacturers of the goods, praise autobuffers from the point of view of describing the properties of a material such as urethane:

All of the above characteristics of urethane are good, but the bulk of consumers of such products are not least tormented by the issue related to the cost of auto buffers. Many would like to know why Zhiguli spacers cost about 200 rubles, and auto buffers Power Guard cost from 2 to 3 thousand rubles.

In this case, the formulation of such a question is fundamentally wrong. It is somewhat unjustified to compare rubber spacers and urethane bus buffers.

Urethanes are colorless crystalline substances that can dissolve not only in organic solvents, but also in water. Based on them, polyurethane fibers are produced by referring to the synthesis method. In this regard, autobuffers are more polyurethane shock-absorbing pillows than urethane. 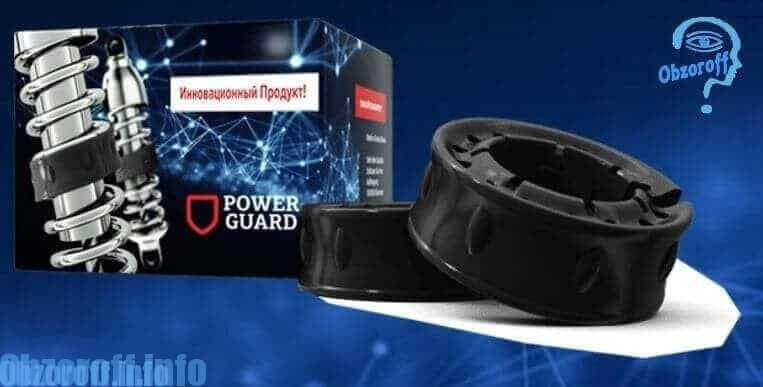 How to buy Power Guard auto buffers and how much does a kit cost?

Price for car buffers Power Guard in Russia is less than a thousand rubles, while you can buy them by placing an order on the website of an official dealer, the cost of delivery is about 300-350 rubles. regardless of the recipient's region. There is information that autobuffers at promotional cost are sold in quantities of 2 or more. In Ukraine, you can buy autobuffers for 270 hryvnia.

How autobuffer works and how it works

The spring should be perceived as a single mechanism from the point of view of physics, working equally in all areas. What happens when the spacer is installed? Adding this element, regardless of what it is made of (urethane or rubber), leads to the turn off of the coil from the process of coordinated work of the spring. As a result, there is an imbalance in terms of load distribution, it becomes uneven: the pressure exerted not only on the spring itself, but also on its cup.

At the same time, urethane wins against the background of rubber, since it is able to change shape under loads and return to its original state when pressure ceases to act on it. Although here again certain doubts arise regarding the effectiveness of such a material, which “walks” in both directions, depending on the pressure forces applied to it. Why is it needed?

In search of an answer, we turned to the appropriate specialist who gave the required explanations. In particular, it was said that the springs are fully capable of fully functioning without additional elements, since the manufacturer lays the required operational characteristics in them. The need for various spacers and pillows arises when a fact such as subsidence of the springs is ascertained. It is from this moment that the need arises for the above-mentioned elements that can ensure the return of the previous spring stiffness for relatively little money.

It is worth mentioning here that a good suspension spring starts from the position of 30 dollars in terms of cost. If the springs on your car are in normal condition, and you are not satisfied with the regular overload of your vehicle, then you can perfectly do without additional elements of the type in question.

Reduced driver fatigue - during long trips, excessive buildup of the car leads to the fact that the driver’s body makes oscillatory movements, and this forces the muscles to constantly strain to return to their original position. It is in this case that the auto-buffers who take care of the driver help out, reducing the buildup of the vehicle.

Comparison of spacers and auto buffers

Some motorists put an equal sign between spacers and shock-absorbing pillows with auto-buffers, as they are focused on the same functionality. Such an attitude towards these elements may be, but it does not correspond to the real state of affairs.

Auto buffers Power Guard, of course, are inserts in the springs, but they have little in common with products in the form of spacers, which in their days were replaced by ordinary balls and elastic bands. At the same time, such rubber could not withstand the frost - it became stiff, quickly lost its integrity - burst and cracked. To a greater extent, similar rubber was used to increase the clearance with the road.

As for the auto-buffer, this element is made of a specific material in the form of urethane, which has an optimal shape, which together provides additional opportunities for your vehicle.

Auto buffers Power Guard They have another name - shock-absorbing pillows, which justifies itself, because by means of these elements it is possible to achieve comfort in terms of operating the car.

To specify the comparative characteristics of spacers and auto-buffers, consider the process of their use.

Spacers and their purpose

Mostly spacers are used to increase clearance. They are installed under the spring or directly under the shock absorber. As a result, you can come to a large clearance value - from 3 to 5 cm. A set of spacers from 4 pieces costs about 3000 rubles. The work to install them is 6000 rubles, as it is labor intensive: it takes to dismantle each rack, which ultimately takes about 4 hours. The total amount of expenses in this case is 9000 rubles. For this money, the motorist achieves the following:

We use Power Guard autobuffers at a price of 4000 rubles. per set, including 4 copies of this product. Installation Power Guard costs 800 rubles, since it is enough to use the jack to do everything that is required in a quarter of an hour. The total amount is 4800 rubles, and the result is as follows:

Auto buffers Power Guard Due to the special shape and use of a material such as urethane, they provide a wider range of advantages compared to spacers. At the same time, the difference in cost is noticeably affected, which also applies to the installation, which is extremely simple in the case of autobuffers. Editorial Board obzoroff.info recommends reading an article on liquid glass Silane Guard Wilson to protect your car's paintwork!